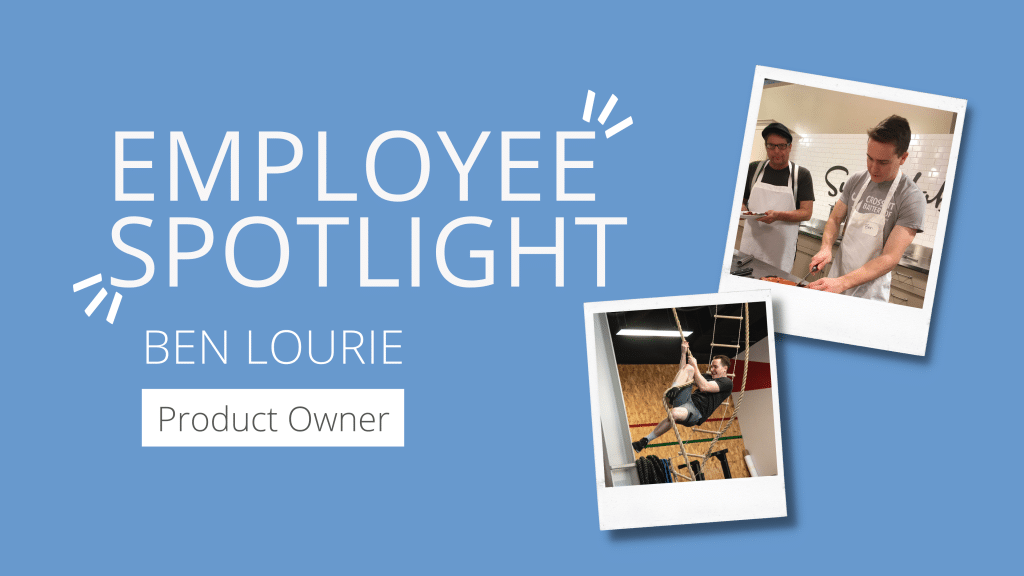 We are excited to highlight our very own Ben Lourie and his career journey as a Product Owner as well as a sneak peek into a day-in-the-life of an Aquiva Labs employee.

From the United States to Abroad

Ben studied Russian and International Affairs, after which he worked at a university in Siberia as a participant in the US State Department Fulbright program. After his time in Siberia, he lived in the Netherlands where he primarily worked in the non-profit space in marketing and communications. From there, Ben went on to get an MBA and ultimately ended up at Aquiva Labs as a Product Owner.

Ben has been with Aquiva Labs for over two years. He joined Aquiva Labs while he was finishing an MBA at Georgetown in Washington DC.  He was looking for a chance to use his newly acquired MBA skills and Aquiva Labs gave him the perfect opportunity to do just that.

In the morning, Ben spends time focusing on the product roadmap for whichever project he is currently working on. This usually takes the form of preparing user stories for upcoming development sprints, which includes making process flow diagrams, describing data models, and even creating screen mock-ups.

The afternoon is usually filled with discussions with the development team about stories they are currently working on and calls with the client to discuss requirements and progress. In addition, he spends a good amount of time testing the product himself and creating demos for customers to show all the great new functionality.

Ben said that, “As a perfectionist, the hardest part of my role is having to live with not being able to maintain a perfect backlog. As we work in agile, I have to be ready for changing priorities.” Anticipating where to add more detail and where to focus on the bigger picture and delay working out the details is one of the most challenging parts of the role. On the other hand, Ben’s favorite part of his role is watching the product roadmap come to life to support a real business workflow.

Aquiva Labs gives Ben the best of challenging work and a true work life balance.” Just as soon as I feel my work has become routine, I get a task to work on that forces me to up my skills and excites me,” Ben stated. “At the same time, there is no pressure to work overtime constantly. Whatever fits in the workweek is what gets done, and there is rarely pressure to sacrifice weekends or time off on urgent deliverables. We plan well so that people can get the rest they deserve.”

When discussing the company and team atmosphere, Ben said that he believes there are few companies out there as supportive as Aquiva Labs. “We have an extremely friendly, open culture. I feel comfortable speaking my mind and admitting mistakes when I make them,” he said.

Ben is passionate about food and fitness, with the former largely driving the need for the latter. In his free time he loves trying new restaurants, cuisines, and cooking new recipes for himself. To support these habits, Ben does CrossFit several times a week and even occasionally participates in amateur competitions at his local gym.

Ben is also currently pursuing a lifetime dream of his to open a restaurant. He decided to open a fast-casual TexMex restaurant and while he is not involved in the day-to-day operations, he is the mastermind of most of the recipes. “Aquiva Labs has been supportive of me throughout every step of the way, including being our first customer as we catered the corporate retreat over the summer of 2021,” said Ben regarding support outside of the workplace.

Getting started in the industry

Whether you’re looking to break into the tech space, familiarize yourself with Salesforce as a career, or wanting to join the Aquiva Labs team, Ben says that you don’t need to know how to do everything in your role right off the bat. “A lot of things which I do without thinking now seemed overwhelming to me when I first joined. As long as you have a desire to learn and work on yourself, you will succeed at Aquiva Labs” Ben said. Aquiva Labs selects employees not only based on where they have been, but where the company sees them going.

If you’re interested in joining our team, check out our open positions and apply today!